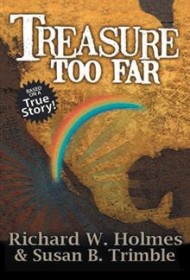 Treasure Too Far is a novel based on the life of Bob McComas, a man who felt certain that phosphate deposits in the ocean off the west coast of Mexico could be mined and sold for a profit. McComas, rendered in the novel as Bob Collins, persuaded financial backers in 1967 and again in 1985 to send him on expeditions that might turn a profit. In real life, McComas died destitute in Oklahoma City during 2008.

In the novel, Collins doesn’t fare much better.

The story opens on a ship exploring Mexican waters in 1967. The main characters are the aforementioned Bob, ship captain Eric, and young geologist Clara. Bob is obsessed with finding the mineral that might make him wealthy. Eric is a talented captain, but more interested in whoring when the ship docks than in scientific exploration. Clara is nervous about being at sea; she is hoping, though, to weather the rough waters in order to impress her corporate employer with a financial stake in Bob’s exploration.

When the mission at sea ends without major success, Eric, Clara and Bob go separate ways, only to meet again off and on throughout the novel. While Eric and Clara achieve varying levels of success, Bob never finds the treasure he seeks, not even with off-and-on assistance from Eric and Clara.

The plotting is more confusing than compelling, as each character disappears for many pages at a time, especially Bob. The writing is heavy on dialogue, which occasionally rings true but usually seems stilted.

When the novel does occasionally pick up steam, the authors then distract readers due to the typos and misuse of words. For example, characters “pour” over maps instead of “pore”; attempt “interruptive” work instead of “interpretive”; see “know one” they can speak to in town instead of “no one.” Such errors and awkward writing will make it difficult for readers to navigate the book through to the end.