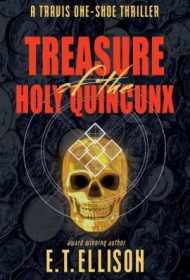 In this near-future dystopian, sci-fi novel—an addition to E.T. Ellison’s six-volume The Nevergate Chronicles—a partially cybernetic ne’er do well finds himself on the dangerous end of a treasure hunt.

Ellison borrows precipitously from a variety of subgenres, ranging from the cyberpunk of William Gibson and Neal Stephenson to the ultraviolence of films like A Clockwork Orange and Mad Max. After a brief, violent introduction to the community of St. Coriander, set somewhere in the American Southwest, the story advances about 100 years to the early 23rd century, after a blackout has devastated modern society.

The main protagonist, Travis One-Shoe, is of Native American descent. It’s hard to say exactly what he does for a living; he operates somewhere between a bounty hunter and a salvage expert in the vein of John D. MacDonald’s Travis McGee. After Travis discovers a dead man in the desert, he finds himself inexorably connected with the man’s sister, Maya Ng, a smart, hardy security tech whose moves match Travis’s not-inconsiderable penchant for violence.

The plot is extremely messy, but it boils down to the two main characters pursuing a treasure hunt for a set of “codeboxes” that represent the map to a hidden fortune. The titular “quincunx” are five obelisks at the center of a long-abandoned holy place behind which lies… something: “Very mysterious and foreboding and you can’t not wonder what’s inside,” says One-Shoe.

Plot-wise, the story is dense. There are power struggles, territory disputes and a plethora of futuristic technologies, ranging from cybernetic implants to artificial intelligence to holographic simulations. Be forewarned that the book resolutely refuses to fully explain these completely, which might frustrate some readers.

Tonally, it walks a fine line between neo-Westerns and old-fashioned pulp fiction. Best to treat it like the first time you saw The Matrix and let it wash over you, and then you can decide whether you want to delve deeper into Ellison’s richly imagined but often ambiguous future.