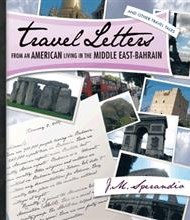 In her Travel Letters From an American Living in the Middle East-Bahrain, J.M. Sperandio takes readers on a magic carpet ride into the Middle Eastern country of Bahrain, “a booming, cosmopolitan place,” where she lived for nearly three years with her husband and son. Her journal-style letters begin with stories of the culture shock she experiences upon touching down at the Bahrain Airport from Houston, Texas, and end with her family’s travels in Europe and South Africa.

At first, the foreignness of Bahrainis chatting in Arabic and camels resting on the roadside shock Sperandio, but soon she becomes adept at recognizing the haze of approaching sandstorms and negotiating the best prices in her favorite carpet shops. However, she never quite adjusts to Bahrain’s chaotic streets or the heat spikes that rival summer temperatures at home.

Sperandio nicely weaves detail, humor, and history throughout her letters. She traces the history of Bahrain’s pearl industry, for example, while describing her quest to buy a pearl at a market where Arab men play guitars and a young boy juggles dates as she passes by. Inside one shop, Sperandio tries on a necklace valued at $60,000 and jokes with the shop owner by smiling and waving as she feigns walking out the door.

Sperandio’s letter-style entries are easy to digest, but the downside is that she omits essential contextual details, such as why the family chose to live in Bahrain. Readers are forced to assume much, including what motivates the family’s movements or the relationships between people who come in and out of their lives. This lack of context, along with an abrupt ending, keeps the book from achieving any real depth. Nonetheless, Travel Letters From an American Living in the Middle East-Bahrain is the kind of book that will take willing readers into new places, with Sperandio serving as a witty and affable guide.