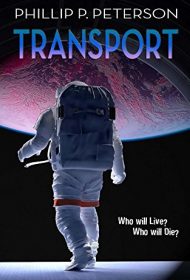 Our hero is Russell Harris, a death row inmate slated for execution in a dystopian future where any severe crime is punishable by death. The former soldier wins a reprieve when he’s recruited for a dangerous mission by his former commander, who sends Russell to an isolated military base. There, Harris learns the true nature of his pardon: He and ten other convicts will be used as guinea pigs for the testing of an alien artifact pulled from the ocean floor.

The device, a large sphere, uses the energy of a black hole to transport its passengers to portals around the universe. But after a technician is accidentally suffocated in deep space and a NASA astronaut is liquefied in a gravity well, our ragtag felons are tossed into the contraption instead. It’s a messy bit of Russian roulette in which Russell, the sole woman Ellen Slayton, and a few others escape unscathed. But half the team comes to gruesome ends: exploded in high pressure, burned to a crisp, and boiled in liquid nitrogen, among others.

Harris makes a breakthrough when he realizes the intelligent machine can speak with him telepathically. But faced with a totalitarian government using his knowledge to weaponize the technology, Russell, Ellen and their comrades must make a bitter choice that pushes them further into unknown territory.

Much like the late Crichton (whose novel Sphere resembles this scenario), Peterson seems more interested in generating suspense via a believable set of physics and other mechanics. than in his individual characters; the inevitable romance between Russell and Ellen feels forced, and the tertiary characters quickly fade into the background.

But that doesn’t change the fact that Peterson has crafted a solid, engaging sci-fi thriller that asks big questions about mankind’s self-destructive nature and its manifest destiny among the stars. Readers will eagerly await two upcoming sequels that continue the story.