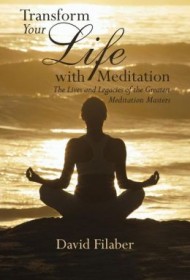 In this slim, expository book about meditation, spiritual seeker David Filaber successfully conveys the answer to the question “What is meditation?” by providing overviews of what the great spiritual masters believe it to be and in what ways it benefits humanity.

The book includes chapters on the 11 great masters of meditation. With headings such as “Meditation by Thich Nhat Hahn,” they describe each guru’s specific take on meditation while also divulging intriguing biographical information. For instance, Hahn was fluent in five languages; Eckhart Tolle once suffered from depression, and Ramana Maharshi was 16 when he disconnected from his feeling of being an individual.

Filaber has generously included a bibliography containing Internet links to video clips of these gurus talking about their philosophies. This offers the reader an additional way to become inspired by meditation, a practice the author is obviously devoted to.

The writing is genteel and edifying but unfortunately reads like the answer to an essay question that has gone on too long. The book leaves no doubt about what meditation is, as it is talked about repetitiously by each guru with only slight variations. (One definition works especially well; Indian guru Jiddu Krishnamurti says, “Meditation helps to remain one in conjunction with one’s own interior, and thus to have a more healthful mind.”)

This volume could be more personally engaging with text on Filaber’s life and what it feels like to be a beginner when it comes to meditation. But even as is, and despite its inherent monotony, it will make a useful addition to a meditator’s bookshelf and could also be helpful in a class on spirituality.