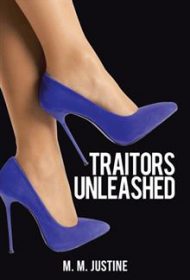 The second novel in M.M. Justine’s Traitors’ Trilogy (following Traitors from Inside Out) continues the story of Dr. Martina Strӧmstedt Edgren and her battle against a malevolent pharmaceutical company.

As Traitors Unleashed begins, Martina is recovering from an attempt on her life. Martina is the CEO of Althonat Global, a Swedish company that produces Rensblad, an herbal alternative medicine that cures a host of ailments. Rensblad’s success, however, is not welcomed by pharmaceutical behemoth Citaraph, which has made inroads into governments across the world, convincing them to vaccinate their citizens with its drug Life-Vaccine.

Contrary to Citaraph’s claims, Life-Vaccine’s effects are far from beneficial, often causing illness and worse. In fact, the vaccine is part of plot by Citaraph to reduce and control the world’s population. As Martina regains her strength, she continues to face threats from Citaraph and its agents, one of whom may be someone close to her. To complicate matters further, she discovers that her young son’s school will soon require inoculation with Life-Vaccine.

The novel, however, lacks the nuances that make an exceptional thriller. Citaraph’s agents come across as one-dimensional mad scientists, and their ability to convince a government such as Sweden’s to force Life-Vaccine on its people seems implausible. Likewise, the apparent cure-all nature of Rensblad strains credulity.

Justine’s writing, as well, can be over-the-top, employing too many adjectives and adverbs (“[h]e took a seat at the small round table, his mind running rapidly busy”) and overheated figures of speech (“Beaten like [sic] rug, mashed and mangled, Martina returned . . .”).

Overall, Traitors Unleashed does not stand out in the crowded thriller genre. Still, it’s central conflict may appeal to fans of suspense fiction willing to overlook the abovementioned flaws.