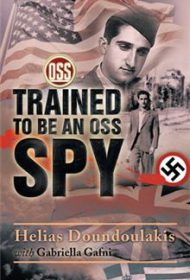 This engaging memoir by Helias Doundoulakis (with ghostwriter Gabriella Gafni), tells the gripping story of the author’s time as an OSS spy during World War II.

Doundoulakis was born in Canton, Ohio. His family moved to the Greek island of Crete when he was two years old. A teenager on Crete when German paratroopers leapt from the skies and occupied the island, he and his older brother, George, joined the Cretan resistance. Betrayed by a collaborator, they fled to Egypt for their lives. There, both brothers joined the American OSS. Doundoulakis finished at the top of his spy class. Offered his choice of two assignments, the author chose to return to Crete as an SI (Special Intelligence) Operative rather than take a “safer” assignment in the Greek mainland mountains.

An unvarnished, understated tale, full of youthful mistakes and narrow escapes, the book is written in a straightforward, conversational style. Readers can easily imagine sitting next to this modest, 93-year-old, decorated veteran as he relates a three-beer story about his harrowing escape to Egypt, his training by the OSS in Cairo, and his secret return to the island of Crete, where he took on the most dangerous spy mission of all: transmitting radio signals right under the Nazi’s noses, while the Gestapo searched for him. That he survived almost a year as an SI is nothing short of miraculous.

“You only live twice, once when you are born and once when you look death in the face,” Japanese poet Matsuo Basho wrote more than 300 years ago. Doundoulakis skillfully conveys that sense of being fully alive, as he transmitted an amazing 400 clandestine radio signals as an OSS spy. This is a tale you are not likely to find elsewhere, one that rings with authenticity.