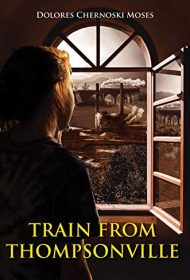 D.C. Moses’s Train from Thompsonville is a coming-of-age novel that follows a young American Catholic girl of Polish descent.

Growing up during the bleak period of the Great Depression and WWII, Joanna Ludak’s parents Joe and Bertha attempt to make ends meet. Joe works at a shoe company where he faces prejudice, while Bertha tries to find a job to ease their economic struggles. Joanna’s aunt and uncle, on the other hand, live fairly luxuriously, and the Ludaks try to keep up with them.

Joanna attends a strict parochial school where one mean nun seems to pick on her every chance she can. In high school, though, she blossoms into a young woman as she navigates new challenges and expectations. The book recounts her life experiences —her unfair treatment in the strict conservative school, playing the lead role in a high school production, her induction into the Honor Society, her friend’s confession, her boyfriend’s betrayal and her consequential break up with him, and her graduation—until the moment she gets on her own train from Thompsonville to attend college.

The story offers emotional depth as readers follow Joanna as she strives to break free from the invisible chains of her blue-collar background and eventually realizes growth and change. Joanna is a compelling protagonist and her struggles and dreams as she traverses friendships, romance, and heartbreak are relatable. However, the story’s lengthy discussions of emotions can be monotonous, and some of the longer conversations add little illumination to the storyline.

Additionally, although the author has a richly descriptive style, conveying the difficulties people faced during a terrifying and depressing time, there’s little action. Thus, the pace is slow and often plodding.

Such issues impact reader enjoyment. However, Train from Thompsonville might interest those looking for a contemplative historical read that paints a grim picture of the uncertainty and the hard times that hovered across America during World War II, especially for Eastern European immigrants.