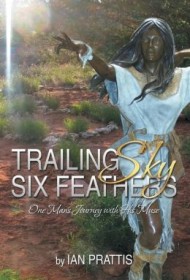 In this spiritual exploration, a highly educated man becomes a humble seeker, works painstakingly through the events of two fascinating lifetimes, and emerges with a message for humankind.

British author Ian Prattis has taught university-level religion and anthropology, but even with this impressive intellectual grounding, his journey was incomplete until he contacted Trailing Sky Six Feathers, a powerful female shaman to whom he believes he was wed, in the 1700s, in Arizona. In 1777, her final vow as he lay dying was, “I will find you, my husband.”

Prattis, whose childhood was marred by sexual abuse, set out to comprehend his present life through his study of religious beliefs of indigenous peoples. This led him to encounters with several contemporary Native American sages who forced him to drop his intellectual approach and accept his lustrous spiritual experiences as real, not dreams or self-induced visions. The merging of the parallel spirit world of Native American religion into his current incarnation put many disparate elements of his life in perspective and facilitated his reunion with Trailing Sky Six Feathers, “the greatest medicine woman the Southwest has ever known.”

Though this fantastic tale leaves room for skepticism, most who read Prattis’ latest work will be swept up in this saga of self-examination, revelation, and indeed, exhilarating global adventure. Prattis writes with erudition, charm and humor, ridiculing his own blunders as much as he praises his teachers.

Now a spiritual retreat leader, Prattis presents a unique viewpoint hewn from hard-won exploration of traditional wisdom, offering all of us the overarching advice to “awaken spiritually” so that we may “create a stable economy and way of life” and save Mother Earth.