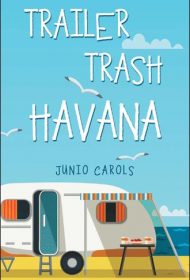 In Trailer Trash Havana, author Junio Carols introduces readers to a quirky cast of mostly rudderless wastrels, living the cheap life in a shabby trailer park by the sea in Spain.

The characters are numerous; most are oversexed and looking for hook-ups. Among others, there’s Nobby, a well-heeled gay man living with his flirty partner, Willie; Lucinda, who, in her mind lives above it all; Roberto, her whining, complaining husband; Dicky the owner of the local bistro; and Javier the transvestite, still unsure of his sexuality, but a working actor and costume designer.

The book’s first half is devoted to describing the various characters and their messy relationships, leading up to Lucinda’s 60th birthday bash at the bistro. When Nobby becomes wildly jealous after Willie falls into Javier’s arms after slipping on the floor, a melee ensues requiring the police, who lock the whole crew up in jail. According to the chief officer, “A bigger set of misfits, Jefe had yet to find.”

In the book’s second half, the jail experience moves the entire group to reevaluate their situations. “Would they be able to move on and not hold grudges against each other?” asks the narrator.

This slim book, meant to be amusing, indeed offers a chuckle or two. About one large woman’s “first dibs on bagging a comfy seat,” Dicky thinks to himself: “With all of her padding, she wouldn’t notice if she was sat on a cactus.” Most lines fall flat, however, including the many jokes about pussies: cats and otherwise.

The bigger problem, though, is that squeezing so many characters into a mere 134 pages means that each character is sparsely developed. As a result, it’s hard to keep track of who is who, let alone care about their various situations.

Without characters to invest in, readers are unlikely to find the limited amusements the novel delivers worth the ride.