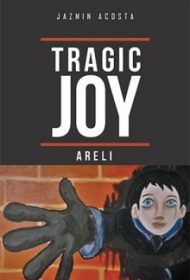 Passions derailed, nobility turned nasty, and a girl with the power to change reality—all ​figure into Tragic Joy: Areli, an engaging ​fantasy by Jazmin Acosta.

When the planet of Argil was destroyed, Argilians were allowed to share space with humans on Earth, but now Argilians are often ostracized due to their magical abilities.

Argilian Areli has the power to make objects change their shapes. This talent, plus her beauty, attracts Edgar Kingsley, a handsome, famous young detective, who asks Areli to marry him so that they ​can​ solve mysteries by combining their ​sleuthing skills. But Areli will agree only if they succeed in their mission​:​ to find the Phantom, who is said to be spreading a strange plague in the town of Vilonia. As Areli becomes increasingly certain that Vilonia is in peril—but not from the Phantom—the question becomes whether she can convince Edgar before someone else moves in for the kill.

After a brief recap of the backstory—some might wish the author had taken more time here—Acosta​ places readers immediately in the action, realistically depicting the budding romance between determined, suave Edgar and nervous, alert and curious Areli. The atmosphere, interactions and scenery​ described almost ​resemble Earth as we experience it, but an Earth inhabited by demon cats, bizarre diseases, and the highly suspicious group in power in Acosta’s well-drawn, scary little burg of Vilonia.

Acosta’s writing is capable, her plot well thought-out. While not labeled as such, the story seems aimed at young adults: the vocabulary is simple and profanity-free, ​the storyline is exciting and amusing with plenty of current slang, ​and although there is a love interest, no one steps outside bounds of propriety. Adventure is​ always on the boil.

Even better, the story delivers what fans of young adult fantasy often crave: a conclusion that leaves the door wide open for a sequel.