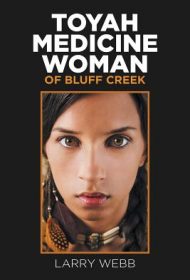 A controlled mix of history, archeology, memoir and fiction, this book offers a well-crafted picture of the almost forgotten Toyah culture that existed in what is now the Southwestern U.S. and northern Mexico in the years before the arrival of Europeans.

Beginning with an account of his own ramblings through the family property in Texas and discoveries of flints, spear points and tools, coupled with discussion of similar finds made by neighbors, author Larry Webb first puts together a picture of the Toyah people and the lives they led.

After setting the stage, he uses fiction to flesh out the narrative, focusing on the life of Chandana, a medicine woman of the Panther tribe who also becomes the group’s shaman and later its chief. Although more serviceable than artistic, this novelistic section introduces readers to such things as tribal medical practices, vision quests to divine the future, love between members of neighboring Toyah clans, and dependence on the buffalo to sustain them all.

This last is particularly engrossing. According to Webb, the Toyah were among the first American natives to hunt buffalo. Because horses were not introduced on the continent until after the culture had passed into history, the group prodded the buffalo into stampeding over a drop (called a “buffalo jump”), which killed or otherwise immobilized most of them.

At its end, the book returns to nonfiction, with the author’s chapter-by-chapter account of sources for his novelistic section. This is not entirely scholarly, as in addition to citing academic researchers, Webb again refers to his own discoveries and conclusions.

While this unusual mix of genres could be jarring, the author achieves a seamless telling. He employs simple, unembellished prose that continually supports his conclusions about a nearly lost culture and fills in gaps in the pre-Columbian history of the Southwest.

The book will appeal to those interested in the period, but also anyone drawn to one man’s quest to resolve a mystery.