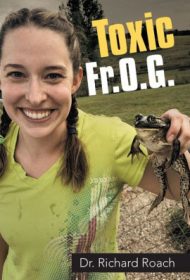 Francine Olivière Gagner is known as “Frog” because of her initials. Fittingly, she loves these amphibians, especially the poisonous ones. She also is devoted to her best friend, Melonee, a Native American. The two are Michigan high school seniors when a man commits a hate crime against Melonee and Frog fights him off. The friends bond further through the investigation and trial, where he is convicted and imprisoned.

The novel then follows Frog on a university exchange trip to French Guiana, where she does field study with an indigenous tribe. After grueling tests to determine her worthiness, the village’s shaman agrees to pass on to her his knowledge of frog poisons. When Frog returns home, she and Melonee find themselves in danger again when Melonee’s attacker is released from prison.

Roach has created an appealing character in Frog, whose love of science and loyalty to Melonee are palpable. Frog’s family relationships are also delicately portrayed, particularly her difficult but ultimately loving bond with her mother.

Frog’s exchange trip, which forms the bulk of the book, is compelling on both a grand coming-of-age scale and smaller issues: her realization, for instance, that the Quebecois French she learned from her grandmother won’t cut it at her host university. Given this rich material, the crime subplot feels tacked on. Interweaving it more effectively throughout the book would improve the story, as would jettisoning it in favor of a quieter crisis.

Another jarring element is the author’s frequent mentions of Frog going braless due to her hyperesthesia syndrome, which causes extreme sensitivity to touch and texture. It seems unrealistic and slightly prurient for the character to constantly highlight this routine clothing choice.

Toxic Fr.O.G. contains much for teen readers to enjoy. Rethinking the narrative structure, however, would greatly enhance its appeal to its target audience.