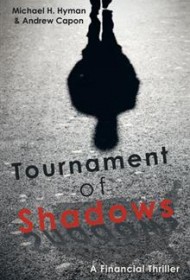 A dogged broker risks his life to uncover something amiss in the world of finance that threatens to exploit the financial weaknesses of the United States in this complex and rewarding financial thriller.

Protagonist Jack Romanov, who runs Romanov Capital out of London, gets a cryptic message about a global trading group that may be aggressively shorting the bond market, which could cause a major economic threat to the U.S. But before he can find out more, the messenger suddenly dies.

When another key trader is found dead a short time later, Jack starts assembling puzzle pieces that indicate that the men have been murdered and, further, that link Russian brokers to a nefarious plot. Suddenly, there’s a huge target on Jack’s back as he rushes to get word to the White House about who is behind a plot to fatally destabilize U.S. markets.

Written by two men with seasoned financial careers, this ambitious, deftly crafted book shares the deep inner workings of the finance world and its very real vulnerabilities, yet executes the details in such a way as to make this world accessible to lay readers. The authors display equally capable writing skills in their descriptive suburban London backdrops, for example, “. . . street after street of 1930s pebble-dashed semi-detached houses with front gardens concreted over, providing parking spaces for tired-looking cars.”

The intelligent plot is skillfully sketched, down to a harrowing chase scene. In addition, the good and evil characters are vibrant and richly presented, although the story might have been more engaging had there been a stronger backstory regarding Jack’s personal relationships, particularly regarding a former girlfriend who plays a key role.

Despite that minor failing, this potent, intelligent thriller has the magnetic qualities to please a wide audience.