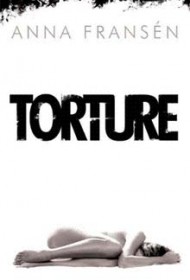 Anna FransÃ©n’s main character in Torture is Petra, a Swedish woman in her early 20s who has a two-year-old daughter who lives with her ex-boyfriend and an abusive current boyfriend named Hans. The story, which is true according to the book jacket, is about Petra’s (and therefore we assume the author’s) attempts to get away from Hans.

Petra has a history of drug and alcohol abuse that she has kicked; she now wants to help Hans fight the bottle. The story alternates between escalating tensions between the two, leading to constant physical altercations, and her decisions to stay or go. Finally, Petra begins to fear for her life as Hans spirals out of control. Unable to escape him, she is forced to change her identity; at last, she forges a new life that includes her daughter.

At least, that’s what seems to happen in a book that is largely incomprehensible. According to the book jacket, the work began as a short story that “got soled” [sic] four times to Swedish magazines. What may have worked in the Swedish language doesn’t translate easily into English. Everything about the book, from sentence structure to spelling to grammar, suggests only a rudimentary knowledge of the language. An example: “The worst part is that the police advised the social welfare office and me to move are going to pay for a bed if I pay the new rent.“

In the afterword, the author explains that she wants to help victims of abuse through her story, as well as let the Swedish people know that their system should be more attuned to people struggling with alcohol, drugs and violence. Given the author’s interest in improving the social system in her home country, it’s difficult to understand why she felt the need to tap into the American audience. This is one case where the story is lost in translation.