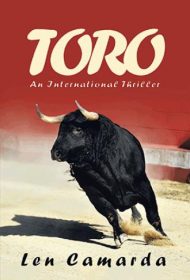 Late one night, a leading bullfight promoter in Spain is first drugged, then cast into Madrid’s premier bullring to be gored and mutilated by an enraged bull. Solving the crime becomes the job of Chief Inspector Mercedes Garcia of Spain’s National Police, wife of American Gino Cerone, formerly of the Secret Service now assigned to Interpol.

This first killing leads to others around Europe: a racehorse trainer in France, the director of a primate research center in Amsterdam, a sleazy promoter of greyhound racing in England, the organizer of the running of the bulls in Pamplona. All die in ways connected to their occupations, with similar drugs involved and a white dove feather left behind in all.

Because they are spread across the continent, Interpol is involved. Thus, Mercedes and Gino join together on the investigation, as they have in two previous novels. Working with local police, national enforcement agencies from the countries involved, and with the informal assistance of the FBI, their search turns up suspects. All belong to organizations combating animal cruelty but have ironclad alibis. Then Gino vaguely recalls the plot of a Hitchcock movie— which eventually leads to new areas of inquiry.

Unwinding these strands takes investigators down twisting paths requiring skill and effort, which the author follows adroitly. Readers will appreciate the careful plotting.

Unfortunately, the story is often impeded by stilted dialogue, as in: ‘Vergilio, you said that Victoria’s mother was here. Do you think that we might meet with her?’ ‘…I can’t see why not,’ replied Virgilio. ‘Why don’t we walk over to her hacienda…and knock on the door? She is a very charming lady.” Additionally, the narrative sometimes includes more backstory than necessary, slowing momentum.

Still, those interested in animal cruelty will appreciate the questions the novel raises. Cleverly, the author leaves the answers up to his readers.