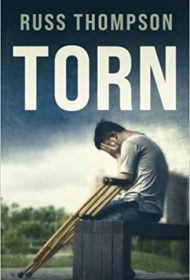 Torn is a short, quietly engaging young adult novel about health and empathy.

The novel is narrated by Perry, a high school track runner who seriously hurts his knee after trying to catch a young thief stealing a package from his porch. He later discovers the thief is dating his younger sister and is one of the students in a peer tutoring class Perry volunteers in.

Working towards a track scholarship to college, Perry continues to run after his injury, risking further damage. He even forges a letter from his mother and practices in secret after his coach tells him he needs to take it easy. Adult readers will immediately realize how damaging this could be, but Perry has to learn the hard way, facing the possibility of losing his dream.

Perry’s changing relationship with Doyle, the porch thief, is nicely layered and authentic. At first, he’s angry with Doyle, believing Doyle’s theft has destroyed his track career. His attitude begins to shift, however, when he learns more about Doyle’s difficult home life as a foster child. Although there are times when Perry wants to vent to his friends, he also feels bad for “Doyle getting knocked down all the time.”

Watching Perry help this young man is heartening, as is the story’s underlying theme: that Perry and Doyle have more in common than they first would have suspected.

The novel’s language is simple and plain, often delivered in one-sentence paragraphs. This makes for easy reading and would particularly appeal to those who struggle with long narratives. However, young adults with advanced reading skills might find the narrative too basic.

Additionally, Perry’s continued defiance of everything his doctor, mother, and coach say is sometimes hard to believe.