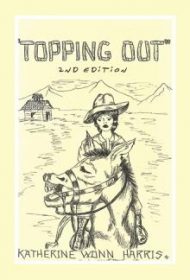 The title Topping Out refers to a term mountain people use to describe the achievement of “reaching a distant and always difficult goal.” And it was a difficult goal indeed for a newly minted 16-year-old “schoolma’m” to teach pioneer children in the hardscrabble lands of Idaho’s Salmon and Snake River country in 1916.

Katherine Wonn Harris’ historical novel, based on personal experience, skillfully reflects the tone of an educated teacher and journalist of her day. The book recounts a single year in her narrator’s life, in which she teaches at one rough schoolhouse before taking an ensuing summer position at a far more isolated campground. (The book has been edited by Harris’ niece; Harris died in 1979.)

Topping Out excels in its poetic descriptions of the land, (“one predominant chasm coiled into the tapestry of distance”), and people (his face “deeply tanned with long, tong-like lines from nostrils to the corners of his wide mouth”). Her detailed accountings are impeccable, e.g., the art of packing the horse/burro for a pack train, the seasonal movement of cattle, harnessing water, etc.

But Harris often stifles the story’s narrator, conveying no backstory until a brief nod halfway through the book. We never know why a 16-year-old girl would want to run to the stark mountainous wilderness to teach (and in 1916!). Or why, when her first term as a teacher is about to end, she would accept a summer job in an even harsher wilderness instead of going home. No reason is proffered.

Additionally, although her narrator occasionally reveals such feelings as shock, fear and  insecurity, the book begs for more verbal interactions and conflict. In a rare instance, when she has a fight with a would-be suitor, Topping Out springs to life.

It’s frustrating that for all its detailed prose, Topping Out lacks true emotional spark. Nonetheless, readers will glean more knowledge of 1916 Snake River country life in this book than a mountain of research could convey.