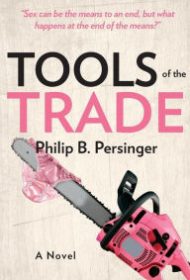 With its themes of billionaire business rivalries and libidinous liaisons in New York City, Tools of the Trade could be mistaken at first for a sly take on an upscale romance novel. But author Philip B. Persinger has something cleverer in mind for this witty, prurient tale, creating a character study of alpha males and just-as-alpha females.

It’s a rich tapestry of individuals, all fully realized and none less than interesting. The book plays somewhat like a Robert Altman film, taking its time to lay the relationship groundwork before the stories coalesce in the final act. With big money and bigger passions at stake, some violent action kicks in near the end, which feels a touch incongruous but still satisfying.

The book is ultimately more amusing than outright hilarious, and it might benefit from weaving together some of its disparate threads a bit earlier. But sharp storytelling, crisp dialogue and complex characterization make it a generously entertaining read.