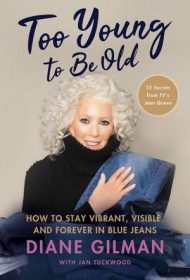 In her fascinating memoir, women’s clothing designer Diane Gilman (with Jan Tuckwood) recounts her extraordinary path to success and fame in the fashion world, and offers insights on how to “rock your life at every age.”

Gilman recounts how, when she was four, her father began sexually abusing her and later traded this abuse for verbal cruelty and threats of physical violence. As she grew, she used sewing as a mental escape, a skill that served her well throughout her life.

Attending UCLA in 1963, she sewed brightly colored outfits to wear. She hung out with a bohemian crowd and embroidered and embellished jeans for Janis Joplin and Jimi Hendrix. Later, she opened an L.A. boutique with two friends, featuring their original designs. (To their astonishment, Cher swooped in one day and bought every dress in the store.) She also landed a Bloomingdale’s contract for her iconic Cabal blouse, a prairie-meets-power style that sold nearly a million items.

But success didn’t always bring happiness. Gilman eventually found herself overweight, middle-aged, menopausal. Moreover, she lost the right to use her name to a Hong Kong conglomerate. “I barely recognized myself,” she writes.

Gilman offers valuable advice for women over 60. She stresses being visible, dreaming, smiling, and embracing your friends and second chances. Her writing is spirited, entertaining, and clever, yet she doesn’t avoid the hard topics, including a devastating breast cancer diagnosis, from which she recovered.

Some may find a few of her suggestions elitist, but this is easy to overlook, as Gilman’s story is universal in its message to embrace your age and take every opportunity to make your third act a smash hit. Her enthralling memoir is a tour de force for women of all ages who strive to make their lives relevant and fulfilling.