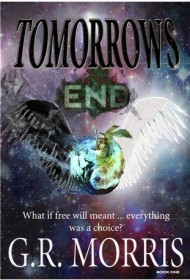 In G.R. Morris’s first book in his Path of the Savior series, the future of the universe depends on the prophesied “savior,” a teen boy named Kevin Knight, who must battle the forces of evil.

Kevin has been preparing to be a savior his entire life. Considering Kevin is deeply afraid of the dark, however, even he has a hard time believing in the validity of his calling. When followers of The Dragon—an evil entity that wants Kevin dead—discover his hiding place, Kevin and an alien named Robert have to fight for their lives against the forces of hell. The outcome of the epic battle will not only determine Kevin’s future, but the fate of the entire universe.

A diverse cast of aliens, changelings, and humans are at war alongside and with Kevin, and the battle for the universe spans multiple times and worlds. In a future Earth, Wildfire and Nightstalker are also caught in the cataclysmic struggle. Nightstalker is an undefeated warrior with a broken heart and a wry sense of humor, and the bloodthirsty Wildfire is as buxom and sexy as she is deadly.  The destinies of these super beings intertwine with Kevin’s to establish the fate of tomorrow.

Morris builds richly detailed worlds and weaves complex religious and philosophical themes into this solidly science fiction epic.  Kevin undergoes a classic messianic journey, suffering trauma and facing difficult trials in order to fulfill his prophesied calling. And there is no lack of gore for those who enjoy the slime and grime of dismembered aliens and piles of carcasses in their sci-fi.

The story suffers, however, under the author’s indulgent and detailed descriptions and the sometimes–tedious inner lives of the players. For example, one early chapter spends at least three pages predominantly devoted to one character’s bored observations of customers in a diner.

Despite such missteps, Tomorrows End will likely hold some appeal to fans of ambitious and wickedly gory sci-fi and fantasy epics.