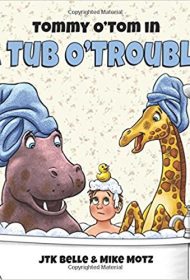 Tommy O’Tom in a Tub O’Trouble is a delightful picture book for both parents and children, bringing an element of wonder into the familiar setting of bath time.

Tommy is enjoying himself in the bathtub when he’s joined, one by one, by a few unexpected guests: first a giraffe and hippo, who are soon followed by a flamingo, zebra, and elephant. As the animals each climb into the tub to join the fun, trouble ensues: “They splashed water/ all over the floor./ They got mud on the rug/ and the door.” They play with the drain and showerhead, as Tommy’s mom continues to call for him to get out of the bath —until she finally enters the bathroom and sees the mess: “Tommy tried to explain/ just who was to blame/ but the animals had all disappeared.”

Children are bound to relate to this imaginative story, in which Tommy seems about to be reprimanded for something he didn’t do (or did he?). The story is enhanced by colorful, humorous illustrations that include animated expressions of Tommy and his newfound friends. The illustrator also provides fun details, such as the flowered wallpaper, and dirty footprints and puddles on the bathroom floor.

If there’s a bone to pick, it’s that the meter is occasionally uneven. For example, when the elephant and giraffe jump into the tub, the story reads: “There were feathers all over the place./ On Tommy’s shoulders. And his back./ And his face.” (Removing the first “And” would make a smoother cadence.) And the rhymes aren’t always true (such as rhyming “in” with “wings”). Also, since the stanzas are formatted differently and split between several pages, readers may find themselves back-tracking to discern how the authors intended the lines to be read aloud.

That said, this remains a delightful story—one that adds a whimsical touch to the otherwise routine ritual of bath time.