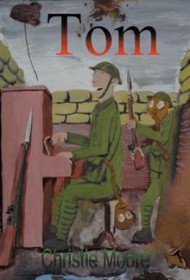 In this well-meaning war novel, Christie Moore aims to honor her late grandfather: “He was a postman, he went to war and was gassed,” she writes in the simple epilogue to Tom. A back-cover photo shows a slender young man wearing army woolens, boots, cap and haversack, standing stiffly before a pale military tent, a foot-long bayonet fixed to his rifle. The soldier is gazing into the camera’s lens with an unreadable facial expression. Is it fear? Youthful resolve? Something else?

Sad to say, this mysterious old picture might be the most eloquent thing about Tom. Moore has limited skills as a novelist and the saga of her hero, Tom Lane, moves but dimly from the streets and smoky pubs of pre-World War I West London to the muddy horror of Flanders and back again, where the gas-ravaged veteran copes with aching lungs, tries to make his way as a music hall pianist and gets the mail delivered. In different hands, such material might yield a memorable portrait of an English Everyman caught up in the cruelty of The Great War, then the Depression and World War II. Moore, unfortunately, doesn’t achieve that level of satisfaction.

Two examples of her prose: “Tom and Ruby has [sic] another child in April named Frances but it is not a good time for a child to be born in the middle of a war”; and “The machine gun rains its deadly death around Tom again and more of the tree stump splinters.”

What virtue can be found here? Well, let’s count for something the devotion of a granddaughter to her family and the well-meaning intention of commemorating one soldier’s courage.