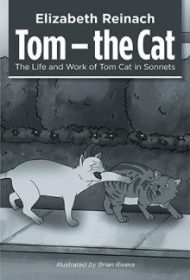 Elizabeth Reinach’s Tom – the Cat is a book of Shakespearean sonnets about a speaker’s pet cat, Tom.

The sonnets are written from the point of view of a man exploring aspects of Tom’s life, from the time he obtained him when he was a kitten, to Tom’s demise when he was 17. Tom is an intact male, and the verses Reinach writes about him are sometimes rueful, sometimes affectionate, and sometimes sardonic. (“Tom shows a taste for Decartes’s [sic] philosophy/ ‘I miaow, therefore I destroy. Cat I am.’”) The author, however, seldom indulges in sentimentality, for Tom’s life, as stated on the book’s back cover, “is the antithesis of love and heroism.”

Each poem begins with a line from one of Shakespeare’s sonnets, which serves as a point of departure for the speaker’s own reflections. For instance, the first line of Shakespeare’s 27th sonnet—“Weary with toil, I haste me to my bed”—gives the speaker occasion to describe Tom’s under-the-sheet attacks. “He ambushed [my wife] and bit her heel.” Among other topics the author covers are a cat fight, Tom’s mouse hunting and amorous liaisons with other cats. Some of the poems are illustrated with gently humorous black-and-white drawings by Brian Rivera.

Reinach is apt in supplying details from Tom’s life, from a description of him “wriggling through grass and fern,” to his after-hunt “mouth of clown, crammed with his prey.” Sometimes, however, the structure of the sonnet leads her to stretch for rhymes. For example, to rhyme with street, she declares, improbably, that “Tom is the hero whom the Queen will meet.” In placing a value on “Tom’s gifts and food,” she concludes: “The returns were poor. I nearly sued.”

The sonnets don’t have the consistent vivid and gem-cut language to sustain readers through 33 sonnets about a cat. Still, feline fans may find moments of enjoyment in these pages.