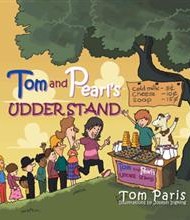 In Tom Paris’ new picture book, Tom and Pearl’s Udder Stand, a boy and a goat discover a secret room and build a profitable business.

Tom McPherson is a young boy who lives on his grandparents’ farm with Pearl, his pet Nubian goat. One day while doing their chores, they discover a mysterious door hidden behind hay bales in the barn. The door leads to a long-unused room containing all the ingredients and tools for milking goats and turning the milk into cheese and soap.

Inspired, the two decide to open an “Udder Stand” (as opposed to a lemonade stand). Tom and Pearl do the dangerous work of mixing lye with Pearl’s milk to make soap and the painstaking work of straining the milk’s curds until they turn into cheese. The Udder Stand is a great success, so lucrative that Tom and Pearl are able to open their own dairy emporium. The story ends with a twist that readers probably won’t see coming.

Much of the information in Tom and Pearl’s Udder Stand is valuable, especially about the soap- and cheese-making processes. But when Pearl refers to an udder as “the belly of a goat where the milk comes from,” this unscientific, somewhat prudish description undercuts the book’s informative aspect. Also, the stand’s sudden success and the story’s ending are somewhat jarring.

Although the book includes useful material and a few amusing puns on “udder stand”/”understand,” it isn’t polished enough in plot or writing style to be a standout in a crowded market of farm-themed picture books. Joseph Ingking’s zany illustrations suit the story but are too amateurish to add to its appeal.