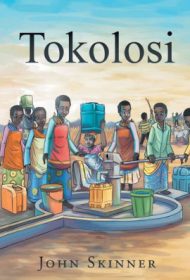 Set in the 1990s in a fictional undeveloped country in the southern part of Africa, John Skinner’s Tokolosi centers on the inefficiencies that exist when combating crises in many African nations.

Through his family’s sacrifices, Tsabo Mashedi painstakingly acquires his basic education. He receives a scholarship to study at Oxford University in England to become a barrister. His plans, however, are interrupted when he’s forced to return home and take a temporary UN job to support his family during a severe drought raging in his village of Katama and other parts of his country.

In the UN, he works with Harry, a business organization and logistics specialist. Harry also hopes to locate the grave of his grandfather, who may have died years earlier while prospecting in Africa.

The story details the disastrous drought crisis, political upheaval, and a devastating AIDs epidemic, along with tribal tensions. A superstitious and uninformed electorate blames evil spirits (tokolosi) for their misfortunes, and poor governance exacerbates the issues. For example, Mboko is the country’s cunning, corrupt finance minister who nominates his loud-mouthed sister as health minister. And Mr Tsamanachimone is the negligent agriculture minister who cannot stay awake during meetings.

The novel features realistic, entertaining characters, and Harry’s personal experiences are often hilarious. Unfortunately, by following Tsabo and Harry’s personal lives along with the nation’s complicated political and economic issues, the work becomes bulky, and the writing can be dense and sometimes ungrammatical: “The cluster of media smarties, out to trap and trick well-oiled targets into disclosing some juicy indiscretions, contributed zilch to the formality or festiveness of the occasion – nor did the army’s brass band confined beneath the veranda and striving to concoct an excruciating cacophony of discordant noises.”

Additionally, so many characters are introduced to develop different sub-plots that following them all becomes strenuous.

Still, Tokolosi discusses topics that may resonate with readers interested in issues hampering humanitarian efforts in many parts of Africa.