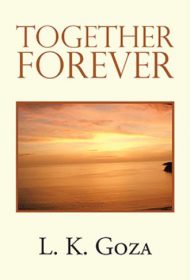 Together Forever is comprised of several short stories and oral histories of members of author L.K. Goza’s family.

The book’s first half consists of three stories that contain flights of fancy that border on cartoonish. In “Doing Good,” a consortium of world leaders decree that all global problems will be vanquished if everyone just does good deeds. This is certainly an interesting premise. But here, it devolves into a jumble of incomprehensible characters and events anchored mostly by a sports contest where the World Series is transformed into the Super Bowl. There are also “misguided bad guys” who emerge from manholes but are easily rehabilitated, “money trees” ordered up like takeout, and a plan to end world hunger by desalinating the oceans – all with a generous sprinkling of pop music references.

In “Long and Happy,” the author reimagines the creation story. In this tale, Adam and Eve live in a cave and have pet dinosaurs. Think Fred and Wilma Flintstone meet the Bible.

The author’s strongest story is “King’s Tale” about a group of talking animals who take a road trip in a large school bus with a German Shepherd guide named King Julian Silva. There’s potential here but unfortunately little actual plot, and all told, the three stories meander rather than power purposefully toward impactful conclusions.

The book’s second half takes an abrupt turn and becomes transcribed oral histories of the author’s father and grandmother. Spanning much of the last century, their tales provide a backdrop for a great deal of modern American history that could be fleshed out into true biographies or even the inspiration for more traditional fiction. But as written, there’s too little structure to move beyond family lore and appeal to a larger audience.

Goza has a freewheeling imagination and seems guided in her fiction by spirituality. She also has a nice touch with detail. But the book lacks the overall finesse to attract a wide audience.