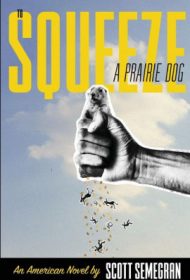 Scott Semegran uses his comic sensibility and keen eye for detail to weave an amusing yet heartwarming romp about the workers in Unit 3 of the Texas Department of Unemployment and Benefits and their lottery pool.

The story alternates viewpoints with everyone in the office—all cogs in the state bureaucracy—but focuses especially on J.D. Wiswall, the pecan-treat-loving, bicycle-riding, easygoing new guy. J.D. is supposed to learn the ropes from his supervisor, Brent, but Brent prefers spending time drinking and thinking about his rock band. In his quest to avoid work, he gets J.D. to tag along, albeit reluctantly.

As a result, J.D. actually learns the ropes from single mother Deborah, who is always bailing out her no-good son, and mother/matriarch Rita, who nurtures her family with banana bread and feeds her office family pineapple cakes. Another employee, Conchino, is quiet in the office, but secretly street races after hours.

The five pool money every week to buy lottery tickets. They also have a pact that if any one of them submits a winning cost-savings idea to the state workers’ contest, they’ll share that $10,000 prize, too. Sure enough, a drunken mistake by Brent wins the state prize, and a subsequent subplot involves the corrupt Governor Bennett and an enterprising, cat-loving reporter Esther Jean.

Semegran takes what could be onerously boring—state workers typing in data, sharing pecan snacks and pineapple cake—but in his able hands, their ordinary lives and struggles become captivating. His descriptions often leap off the page: “The clickity-clack of the computer keyboards of the three workers typing in the back of the small office space was like the cacophony of a chorus of cicadas.” Before book’s end, readers are pulling for every character—even the too-often-drunk Brent.

To Squeeze a Prairie Dog is an entertaining slice-of-life story that’s humorous yet uplifting at the same time. By the novel’s last page, readers will be longing for more.

Also available in audiobook and ebook.