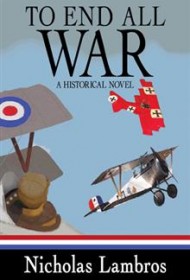 Historical fiction can show readers a time and place in more vivid detail than the mere recollection of the facts can achieve. To End All War accomplishes this—and much more. It’s a tale of World War I, a family story, and a work that delivers a strong moral viewpoint about the costs of battle.

In this story, three American siblings end up in France via separate paths, hoping to aid the war effort. Before the United States has formally declared war, John is flying combat missions with the Lafayette Escadrille. Michael ends up working in field hospitals that would make an abattoir look like a vacation destination. Catherine is initially a translator, but her skills allow her to branch out into cloak and dagger work. Their stories overlap and intertwine; by novel’s end we’ve come to know and care deeply about the family.

Author Nicholas Lambros did extensive research for this novel. He blends all the facts skillfully into a believable story. Scenes set in the planes are harrowing thrill-rides chock full of technical specs on flight and airborne combat, and characters are finely rendered (although when they speak a phonetically transcribed local dialect, be it Cockney English or black American vernacular, it doesn’t always sound realistic and can be awkward to read).

There are a small number of typos or repetitions of a word here or there, but they don’t slow the reading experience down. And the author provides a list of resources for further reading at the end of the book — an offering that’s fully warranted by the interest he generates in the war.

To End All War is an epic novel that deserves a large and appreciative audience. History buffs should lap it up, but it’s ideal for fans of grand family tales or just solid, quality fiction. Lambros has delivered a complex page-turner with a lot of heart.