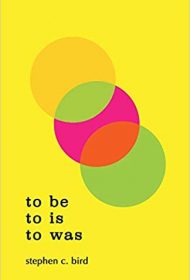 Stephen C. Bird’s to be to is to was is a stylish, imaginative collection of interrelated short stories deploying postmodern narrative techniques to dissect the landscape of media, identity, and politics in the current age. Although most stories can stand alone, all of them reference others (whether through characters, settings, or simply through themes and ideas), creating a whole that’s not quite a novel-in-stories, but displays a unified aesthetic and consistent voice.

Bird glides fluently between magical realism (a boy calmly contemplating his paradoxically postmortem existence from the bottom of a riverbed; a girl whose alternate personality takes on a physical existence), satire (Trump-like character called “Turmerico Inflammatorio” in a country called “Amourrica Profunda”), and speculative fiction (a planet run entirely by futuristic hippies; bioengineered humans who use their faces as reproductive organs).

The author’s style is bombastic and playful, but at times also a little bludgeoning. At first, for example, his penchant for renaming real-world places (“Palm Things,” “Joisey Shitty”) establishes a sort of punk rock aesthetic, but eventually the tactic grows tiresome. Bird’s commitment to word play even supersedes his own established continuity, as when a Harry Potter joke is floated in a story ostensibly set in the ‘70s.

to be to is to was contains provocative and frequently hilarious ideas (an intergalactic, LGBTQ-themed reality show contest that feels like a mashup of a UFC fight and Project Runway; a virtual funeral for a newly perished social media site). Unfortunately, Bird’s flashy style and imagination only carry the book so far: The wordplay is ultimately too gimmicky to sustain an engaging tone and the threads of story are too thin to keep propelling readers forward.

In the final analysis, to be to is to was is an interesting collection of stories from an original literary voice—but one that still seems less like it knows what it wants to say and more like it’s still clearing its throat.