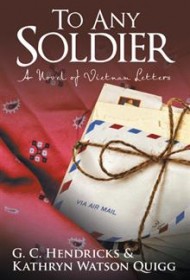 With the exception of a prologue and epilogue, this compelling novel is told entirely from the late 1960s’ correspondence between a teenaged girl and a Marine attack pilot stationed in Vietnam.

The story begins when former pilot Jay Fox visits a classroom decades after the war and finds his memory sparked by the presence of a young woman in the class. After his talk, he returns home to retrieve a pack of letters kept in a file cabinet in his storage shed. The first letter is addressed “To Any Soldier,” and written by Ashley Beth Justice, a college freshman who has heard soldiers don’t get many letters. Having found the letter on the bulletin board in the Marine quarters in Da Nang, Jay Fox wrote back — and so the correspondence begins.

The two share a common background, both having been raised in the South in nearby communities. She is a naïve 19-year-old, curious about the war but also troubled by it. He’s a seasoned 23-year-old given to using words like “gook,” and “faggot,” with no uncertainty about his mission to kill. While they spar about the war and the anti-war movement, they bond over commonalities, sharing poems and childhood tales and soon, even a fantasy life.

This is a finely written, illuminating tale about an era when our country was at odds over a war that many opposed, a war where veterans were often seen not as heroes but villains. The characters are likeable, but imperfect; their situation realistic; their correspondence humorous, direct and enlightening, particularly as it pertains to the life of a fighter pilot at war. Such a tale could turn predictable, but To Any Soldier does not take the easy path and the outcome is a question to the very poignant end.

This tale takes on difficult issues without blinking, and readers will close the book feeling enlightened and moved. To Any Soldier is sure to please a wide audience.