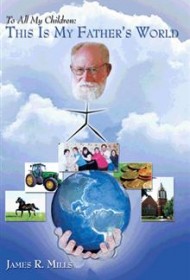 How wonderful would it be if every man and woman left an inheritance of wisdom for future generations? Following a serious surgery on his neck, author James R. Mills did just that by writing down what he considered his most important life lessons. In his sermonette-memoir, This Is My Father’s World, he shares his Christian testimony as well as many life-changing moments from his life of 65+ years, hoping to instruct and inspire his children and grandchildren.

Mills, who describes himself as “just an old farm boy that realized God was working in my life,” draws deeply from the well of the Bible, citing stories and Scripture from both the Old and New Testaments to support his observations about God, faith, communication, submission, guilt, and many other vital topics. In addition, he weaves in humorous, personal illustrations that would remind any reader of an older relative leaning back in his easy chair and asking, “Did I tell you about the time …?”

The author’s format is personal. He addresses his family directly, which is wonderful for them (and for his purposes) but is somewhat excluding of other readers. The stream-of-consciousness-style text often rambles off topic, but that is understandable in light of the homespun, conversational tone of the book, which is very much a grandfatherly reminiscence. The editing also reflects a DIY effort with its plethora of exclamation marks, capped words and phrases, and underlining.

The book is certainly a treasure for Mills’ family and close acquaintances. Perhaps if he would recast it into a compilation addressing a general audience, the sincere, heartfelt messages would have wider appeal and leave an even greater legacy.