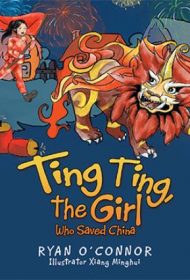 Ryan O’Connor retells a classic legend of China through the eyes of a modern-day, six-year-old girl and her family, in Ting Ting, the Girl Who Saved China.

On the eve of Chinese New Year, Li Li Wang waits with her family for midnight to arrive. Her grandparents have a hongbao—a red envelope with money inside—for Li Li, but before giving it to her, they share the tale of how an ancestor, Ting Ting Wang, saved many people long ago.

As the story goes, Nian, a half-dragon half-unicorn monster, terrorized Chinese villages on the eve of the new year. When her own village is targeted, Ting Ting, youngest daughter of a family of farmers, sneaks out and scares Nian away by wearing bright red clothing and shooting off fireworks. Like many Chinese families today, Li Li and her family continue the fireworks tradition during their own celebration, and she dreams of becoming a hero like Ting Ting.

The story of Ting Ting and Nian will fascinate many children, but the framing device of Li Li and her family allows the book to offer more than a mere retelling. Li Li’s questions and interactions introduce other Chinese traditions, like the placement of a gold coin inside a jiaozi (dumpling), and also prompt an inspiring conversation about opportunities for women, now and in the past.

The writing is excellent—casual, friendly, and appropriate for young children in its vocabulary and complexity.

With illustrations on every page, the book’s artwork enhances the storytelling; for example, one picture shows Li Li’s mother serving the dumplings, while a smaller, inset image shows the interior of a dumpling, with the gold coin hidden inside. Some visual elements and ideas are repeated, which can distract at times, but their size and placement varies enough that it’s not a major flaw.

In all, children will enjoy this enriching, entertaining foray into Chinese culture.