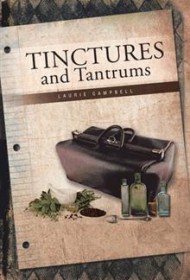 Tinctures and Tantrums is the compelling final volume in Laurie Campbell’s All Manor of Yarns trilogy about a genteel Prussian family in the 1860s. Since discovering her own Prussian ancestry, Campbell has based several series around the von Goff family of Schönwald.

As the novel opens in November 1860, Otto von Goff is concerned about his wife, Hildegard, an imperious invalid who refuses to eat, lashes out at her servants, and believes that there are bandits hiding in the stairwell. The doctor diagnoses her with a phantom pregnancy, but Otto later learns that Hildegard is essentially a drug addict: She has taken opium sleeping potions since she was 16 and also uses morphine and cocaine.

Meanwhile, Otto and Hildegard’s daughter, Luise, is a carefree ten-year-old who fills her time with riding lessons, taking food and clothing to the village’s poor, helping the army of servants with housecleaning, and planning a surprise party for her father’s upcoming birthday.

Hildegard’s illnesses, both real and imaginary, and Otto’s concern for her, form the story’s central conflict. With only a few minor subplots, the novel can be short on thrills. But the author makes up for this with her evocative depiction of time and place.

German phrases are interspersed throughout the characters’ folksy speech, and thanks to a glossary at the end, they pose no confusion. Every character is distinctive and well drawn, including stable boy Ulf, nicknamed “Quappe” (the short form of “tadpole”); Amalie the governess with her prized brass samovar, and even Luise’s German-speaking pet parrot. (Given the sheer number of characters — mostly servants — a cast list would have been welcome.)

Highly recommended for fans of the Forsyte Saga and Downton Abbey.