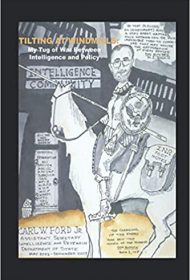 Carl W. Ford, Jr.’s memoir, Tilting at Windmills, offers a sober reflection on the intersection of policy and intelligence gathering in contemporary America.

Ford held high-profile posts during the two Bush presidencies, including heading the Bureau of Intelligence and Research under Secretary of State Colin Powell. Previously, he was a key aide to Senator John Glenn and held military and civilian posts in intelligence analysis. His memoir is not a flashy, buzzy book intended for politicos but a humble document written to share Ford’s life and experience with his family.

The text is unpolished: There are occasional typos, and Ford assumes readers are already familiar with the details of Cold War geo-politics. An editor might have prompted Ford for more historical context surrounding the Vietnam War, for example, or the Israeli-Palestinian conflict during the ‘80s. But Ford isn’t writing a history text so much as sharing more than 40 years of direct experience, which makes his account compelling.

The author raises critical issues: How do we obtain good intelligence? What should intelligence analysis consist of? What forces are at play when it goes wrong (e.g. weapons of mass destruction (WMD) in Iraq)? Behind these questions are anecdotes contrasting the inspiration of gifted leaders with the disappointment of crass opportunists.

Ford recounts, for example, when then Undersecretary of State John Bolton savagely dressed down one of Ford’s subordinates for removing unsupported intelligence findings regarding WMD in Iraq from a briefing Bolton was scheduled to give in a congressional hearing. Ford stood up to him and Secretary of State Powell had Ford’s back, even replacing Bolton with Ford to present before Congress and personally recognizing the efforts of the analyst Bolton had berated.

Ford highly esteems leaders like John Glenn, Colin Powell, and (perhaps surprisingly) Dick Cheney, but has scathing words for Ross Perot, Donald Trump and, most of all, Bolton. Yet he’s no partisan: He faithfully served icons in both parties, and his impressions aren’t about politics, but character.

Tilting at Windmills is a fascinating book. It’s especially worthwhile for students of political science or intelligence, but is accessible to anyone interested in American government or who wishes to contemplate a less partisan time and re-trace the path American foreign policy had taken into the present.