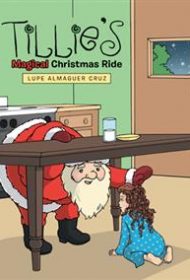 On Christmas Eve, Tillie has modest wishes for the coming holiday: to meet Santa Claus and ask him for new teeth for her Grandma and a fire truck for her little brother. A strange bird snatches her letter to Santa and flies off, and Santa himself soon arrives. Tillie embarks on a journey with him to deliver toys, and they encounter all sorts of obstacles, from a Magical Sleeping Curse, to Old Man Winter, to an African king who wants to keep Santa’s youngest, strongest reindeer Rocket as a gift for his son, offering Santa a gold sleigh and eight camels in exchange.

An author’s note explains that Tillie’s Magical Christmas Ride was inspired by a “mystical dream Cruz had at the age of seven. That’s the perfect way to describe the book: With its unpredictable plot and use of songs, angels, talking toys, white reindeer, and more, it has some of the disjointed qualities of a dream. Although these varied aspects make the book exciting and original, they can also be overwhelming.

Cruz’s writing adequately informs readers of the action, but includes minor errors that have an outsized effect on the text’s flow, such as this one, where Tillie’s words—”Balloons, rise!—seem as if they are a command, but actually reflect Tillie’s realization that because balloons rise, she can use one to send her message to Santa.

Similarly, Vixen is among Santa’s reindeer early in the book, but without explanation is absent from a song and a scene with Santa and Tillie shouting the reindeer names.

The volume is picture-book size, but divided into chapters with a half-dozen nicely rendered color illustrations. It’s unclear if it’s meant for young children or middle grade readers. Bumpy in places, Tillie’s Magical Christmas Ride offers a ride that youngsters may enjoy taking, despite its rough spots.