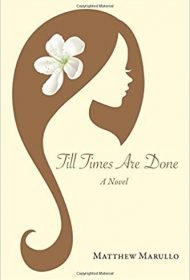 Solitary art geek Angus Wendell awakens one morning in his Long Island co-op to find a beautiful young woman naked and asleep on his couch. Neither can explain how she got there, but conversations between Angus and the gossamer stranger, Sylvia, ultimately reveal that she was living in Brooklyn with her grandfather, though she recalls he recently died in a fire. Sylvia’s obvious unfamiliarity, distress, and pure wonderment at her new situation soon bring Angus to realize that Sylvia believes it’s 1943 instead of the current year 2014.

Over the next two weeks, Angus learns that Sylvia is oddly familiar with details connected to his own ancestry—in particular, information regarding a centuries-old, jeweled heirloom that has been locked away for decades. A motley crew of relatives involved with a shady museum/auction house operation and a rare document containing coded mathematical messages adds to the enigmatic dilemma.

Marullo’s verbose and detailed writing introduces a colorful array of characters that add humor to the greater quandary, including a dementia-ridden elder offering unexpected sexual outbursts, and antic-prone drunk and drug-fueled cousins.  Dialogue that reveals and contrasts the 20th and 21st century cultures, and the impressive knowledge of arts, history, science, and nature that Angus shares with Sylvia, offers a nice touch.

Unfortunately, some lengthier diatribes become rather heady, particularly mathematical equations and directives relative to cracking a safe combination. A minor plot inconsistency proves confusing when a document suddenly changes characters’ hands without explanation. And the final reveal may seem simplistic in contrast to the storyline’s depth and perplexity (although the added twist creates an amicable balance).

Overall, Till Times Are Done is an entertaining, multi-faceted tale mingling the beauty of art and science with a curious connection to the past. It’s an intriguing mystery if you don’t mind the excess.