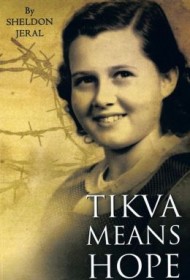 In Tikva Means Hope, Sheldon Jeral tells the story of his wife Tikva’s birth on July 21, 1941, and the chaotic world that awaited her in Nazi-occupied Lithuania.

Tikva was the last baby born at the Jewish Hospital in Kovno. Three days later, her family was sent to the ghetto. While her parents worked each day, she was chloroformed and hidden beneath the floor. When her health began to fail, she was smuggled to a Catholic family for safekeeping. Soon after, her parents were executed.

Using family memories and a few surviving documents, Jeral has reconstructed her story more than 60 years later. Like lore, the tale is laced with drama and emotion, perhaps embellished by the passing of time. The author deftly captures the heartbreak of Tikva’s parents, the courage of her Catholic saviors, and the fortitude of an aunt and grandmother who, after the war, reclaimed her and moved to Palestine. At age 6, Tikva seemed settled into a relatively tranquil life, but at 12 she was uprooted and sent to Philadelphia to live with distant relatives.

Here the pace of Jeral’s storytelling accelerates and the book loses its urgency. Tikva emerges from childhood with issues of separation and loss that will define her life, but instead of continuing the rich description of earlier scenes, Jeral summarizes the next five decades of her life: Tikva yearned for her Israeli relatives; overcame educational deficits and developmental delays; spent years in therapy to treat depression; had her own family and became a social worker. In a final chapter just eight lines long, he matter-of-factly reveals his wife’s deepest secret.

“Survivors of the Holocaust often have great problems talking about feelings and the past,” he writes, and so, too, their biographers, it may seem. The most personal and powerful details of Tikva’s heroic recovery have been left out of his book, leaving it feeling half-finished.

Those interested in the Holocaust will find compelling work here, provided they are willing to overlook the frustrations of the latter half of the book.