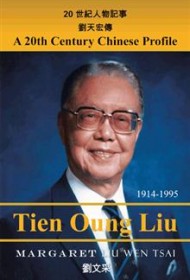 Tien Oung Liu: a 20th Century Chinese Profile is a loving tribute to a man born in 1914 who grew up in China and emigrated to Canada in the last days of his life. It’s a classic tale of a hardworking, resourceful immigrant improving his station in life against all odds.

Author Qin Xiao-meng, the subject’s sister-in-law, “wrote this book in 1998, from her acute memories,” according to the book jacket, having belonged to some of the same intellectual circles as her brother-in-law.

The book opens in turn-of-the-century Shanghai, beginning with the birth of Tien Oung’s father, who is soon stricken with diptheria, leaving his young wife to support five children. Tien Oung vows to take care of the family in the wake of their devastating loss. As the story progresses, readers get insights into Tien Oung’s character and Chinese history. Tien Oung was a brilliant student who became an activist against the Japanese occupation during his university years. One of his brothers fell under suspicion when he withdrew from the Nationalist Army in 1944 and suffered greatly as a result.

After Tien Oung graduated from China’s National Tsinghua University, having studied economics, he went into banking and later became an entrepreneur while living in Hong Kong, starting multiple companies selling items such as clothing and electric fans. The book also describes reunions between Tien Oung and his many siblings, detailing the many monetary gifts Tien Oung bestowed on his family in order to honor his earlier pledge to support them.

Tien Oung is described in glowing terms as a devoted father and husband and brilliant businessman. Although Xiao-meng obviously loves her brother-in-law and admires him greatly, one has to wonder if Tien Oung had any faults. Despite this void, one can’t help but be inspired by his tenacity in making a success of himself, his closeness to his family, and ultimately, his incredibly positive attitude toward the prostate cancer that eventually took his life. Overall, Xiao-meng’s book is an interesting read and a sound representation of an entrepreneur’s rise to success and the cultural milieu in which it took place.

BlueInk Heads-Up: This book may interest readers of Chinese, as the book is written in both English and Chinese. It may also interest those passionate about economics, as the book includes Tien Oung’s writings on monetary policy.