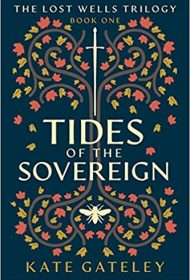 In Tides of the Sovereign, Kate Gateley offers a sprawling journey that melds the everyday tribulations of a university student with a hidden world of magic, reincarnation and mythology.

Readers are introduced to Julia Harrison, a 30-year-old linguistics student at the University of British Columbia who has just re-entered the world of academia after the death of her Grandma Gertie. Her grandmother, we learn early on, wielded magic, as does Harrison herself. Harrison is also a Witch.

When Harrison meets her new professor, a visiting Irish scholar named Dom O’Brien, he immediately resonates with her. That’s not accidental. Harrison and O’Brien have been lovers in countless previous lifetimes, an ageless connection that has always been cut short far too quickly.

The details behind this relationship become increasingly clear as Harrison draws on her power of Sight and begins to recover memories from past lives. Along with O’Brien, she travels to Ireland to unearth the secrets behind past tragedies. The pair meet Druids, find clues about Harrison’s magical lineage and uncover the evil plot of Cassius, a “child of Rome” who has been hunting her through millennia. Through it all, O’Brien and Harrison’s revived relationship blossoms.

Across 500 pages, the author writes with a commitment to character, history and theme. She also pays attention to historical accuracy when it comes to Celtic myth, and is dedicated to portraying strong female characters and incorporating elements of feminism, even at the book’s most fantastical moments. The story and romance at the center of the action are engaging and convincing.

The only shortfall is the academic tone used throughout, which impedes the story’s dynamism. Like her lead protagonist, the author clearly has roots in academia, and overly convoluted language sometimes muddies the novel’s action. However, thanks to her well-drawn characters, she manages to overcome the stuffiness of the language.

Overall, Tides of the Sovereign is an ambitious undertaking that will appeal to lovers of fantasy, history and romance alike.