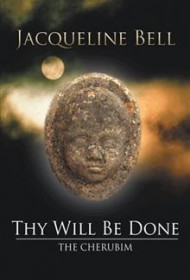 A young British lawyer finds that an unusual inheritance opens many curious doors in this paranormal thriller about the ultimate good and evil. A debut novel with unusual ambition, Thy Will Be Done leapfrogs between Da Vinci Code-style treasure hunting, the tortured romance of Twilight and the apocalyptic fantasy of Danielle Trussoni’s Angelology.

The novel opens on a treasure hunting expedition in a church in the north of Great Britain circa 1955. Oxford archeology students Jonathan, Davy, Henry and Adam have broken into an ancient crypt, where they discover a book of terrible prophecy.

Skipping ahead to November of 2011, we meet Gemini, Jonathan’s temperamental granddaughter, and her best friend, Beth, a few weeks after Jonathan’s untimely death. Over drinks one evening, a tall, bohemian mystery woman named Remne gives the girls ominous tarot readings. She later tells Gemini of the existence of the Book and divulges that her grandfather had safely concealed her from evil forces her entire childhood. Guarded at first, Remne eventually reveals that Gemini is possessed of heavenly powers that make her a virtual angel on Earth.

So begins a sprawling battle between the forces of Heaven and the minions of Hell. Gemini, it turns out, is destined to become a Guardian, protecting the Earth against powerful monsters. The chase takes Gemini and her friends to Glastonbury, where they seek a series of mystical relics, including the Holy Grail. It all leads to a ferocious battle in the heart of Westminster Abbey.

Stylistically, the story runs a bit talky and some of the supporting characters could use more verve—there’s a romantic subplot between Gem and a rather bland boy who eventually marries Beth; Gem gets involved with another supporting character who doesn’t appear until the last 50 pages. It’s enough angsty romance to make the Twilight triangle look straightforward. But barring those minor pitfalls, Thy Will Be Done is a fine, propulsive read in the paranormal thriller genre.