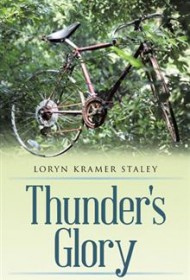 Based on a true story, Loryn Kramer Staley’s novel is a tribute to Cory Horton (his real name), a young man who brought his dream of establishing an elite swim club, the Memphis Thunder, to fruition.

In the book, Cory is portrayed as a kind and determined man with few flaws. Bicycling, swimming and coaching are his passions, and he’s a frequent triathlon participant. The kind of person others like to be around, Cory is beloved by his older siblings and his young swimmers. As portrayed by Staley, he is full of references to the ‘80s music scene and silly rhymes, such as “Free and breast means do your best.” These aspects induce much eye rolling among his young charges, who nonetheless adore him.

Staley details Thunder’s development from a handful of girls without a regular pool to a team that eventually hosts meets and includes two members who qualify for the Olympic Trials. Among the novel’s most engaging plotlines is the team’s challenging search for a pool. The group moves from an apartment pool to one in a backyard to another that had previously been abandoned and is restored by the team. Ultimately, the swimmers find a permanent home in which to train and race, and through these trials Staley adeptly illustrates Cory’s tenacity.

Staley’s attention to detail can be exhausting at times, particularly when chronicling the heartbreak characters suffer after a tragedy occurs; their anguish and anger becomes repetitive and soon wears thin. At one point when a difficult decision is being made, the narrative feels manipulative, designed to eke out pathos when, in reality, the decision should have been rather straightforward.

While Cory is a sympathetic character, Staley’s portrait of him often feels too good to be true and lacks the nuanced and layered treatment that might intrigue general audiences. That said, this is a feel-good story about a worthy subject and may appeal to those in the competitive swimming community.