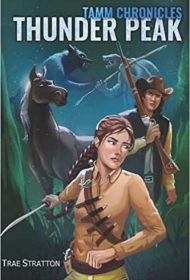 In Trae Stratton’s superb, young adult, fantasy/adventure novel, a teenager learns her true identity and embraces the magical powers of her birthright.

It’s 1885. Fourteen-year-old Casey Tamm lives with her adoptive father, Jonas, in the valley of Thunder Peak, a mysterious mountain in the Arizona Territory where anomalous weather and hauntings are legend.

Casey’s world upends when she sees a unicorn. She rushes home to tell Jonas, recalling his promise that he’d reveal a secret about her parents if she ever saw something inexplicable. Jonas explains that the unicorn is from her mother’s “homerealm” of Leutia. Before he can continue, Sheriff Tanner summons Jonas, a Civil War sharpshooter and standby deputy, to nearby Storm Town where trouble brews.

After Jonas leaves, Casey hears wolves mauling a horse. Silence descends; then, a voice: “I am injured.” Casey finds a bloodied colt outside. They can communicate, and he tells Casey his name is StarFall. He’s from Leutia and became trapped in this human realm known to him as Earther when a portal linking the two domains closed. He will lose his magic if he doesn’t return, but only Leutia’s aril, with their special powers, can activate the portals.

Stratton’s narrative is brilliant overall. Yet it becomes an irresistible reading experience with the introduction of Nightblade, a wolf-like creature from Leutia who has been exiled to Earther and feeds on horse blood, and Taliko, a seven-foot-tall turtle created by Casey’s mother to protect Casey from vengeful aril Elders. Jonas, Taliko, and Casey — who now knows her parentage — race to find a portal for StarFall, while Nightblade ensnares them in malevolent, near-death battles.

This is a stellar opening to the Tamm Chronicles Trilogy. Character development is absolute. Dialogue is impeccable. The writing is masterful, and the plot is multilayered and absorbing, interwoven with enticing plot points for future adventures.

Although Thunder Peak is intended for young adults, fantasy readers of all ages will relish this imagined world.