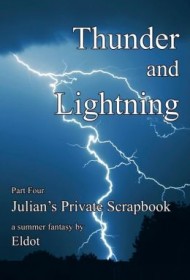 This unusual novel, the fourth in a five-part series, takes place at a scout camp during the summer of 1962 and follows several groups of boys as they form friendships, learn new skills, and fall in love. Much of the novel depicts their various sexual explorations, and the author clearly alerts readers to such content. “This series is meant for mature readers,” he writes on the back cover. “…This book should be stored in a place not accessible by persons under 18.”

In between the sex, several plotlines progress from the earlier books. Tom, an older boy who had been with many others before committing himself to Nick, makes amends for his past treatment of Kurt, an earlier partner. Nick advises Kurt on how to overcome his fear that his past with Tom will sabotage his relationship with his current partner Sid. Julian continues to improve his artistic skills, drawing beautiful portraits of the lifeguard Leonard and his scoutmaster Mark, while taking on further responsibilities in the campground. In a new development, Geoff, another older boy, becomes attracted to Mark and devises a plan for seducing the unwitting scoutmaster. Meanwhile, Mark begins to confront his past trauma.

While the extensive sex scenes may make some readers uncomfortable, they are handled well, showing the tenderness between the boys. Their relationships are fascinating to watch, as many are now committed couples, yet their emotional bonds are strong enough to allow them to learn new positions and techniques in sessions with more knowledgeable boys. Geoff’s pursuit of Mark is handled humorously, leading to a situation where both attempt to conceal their erections. The author helpfully includes summaries of the previous novels, a glossary of terms and characters and more at book’s end.

Thunder and Lightning is a charming read in spite of the controversial subject matter. As it shows further growth in the series’ characters and their relationships, it sets the stage for the concluding tale.