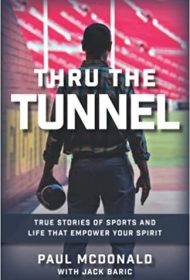 A former NFL quarterback with a “million-dollar smile,” McDonald had seemingly made the transition from sports to a successful career in business. Yet there was a period of time when he floundered, drinking too much and working at a job he disliked.

McDonald describes a harsh wakeup call he experienced in 2008, when he was 50 years old. At a conference in Las Vegas, he was shocked by what he saw in the mirror. “Even though the fog of too many drinks was still clouding my mind, a strong streak of clarity had cut through. I realized this was becoming too much. The pool parties at the Hard Rock Hotel, or being on the VIP list at the MGM, were taking me away from the things in life that are far more important.”

He resolved to make what he called a “halftime adjustment.” He sequestered himself at his Nevada vacation home for two days, contemplating, journaling, reading, and looking inward. The result was his development of 11 principles for living a happier, more fulfilling life. Among his advice: know yourself, both your strengths and weaknesses; believe that change is possible; focus on your strengths; be grateful, and find and be a mentor.

McDonald illustrates these principles with anecdotes from his life and the lives of others, including Caron Butler, a former adolescent drug dealer who became a two-time NBA All-Star, and triathlete Roderick Sewell, who was born missing the tibias in both his legs and became the first above-the-knee double amputee to compete in the Hawaii Ironman race on prosthetics.

McDonald writes clearly and simply and is candid and sincere in his desire help readers. While none of his suggestions are particularly new, they are presented in a compelling style—and all are worth considering by anyone seeking self-improvement.