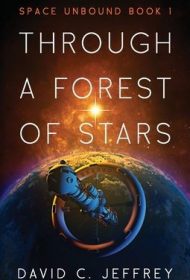 Set in a near future where Earth is “a world barely alive after centuries of human abuse” and Mars has been colonized, the story features Aiden Macallan, a geologist for a ruthless Earth-based mega-corporation. Macallan is pulled away from a potentially lucrative survey mission and sent in a shuttle toward a remote system where a green world— a virtual “Garden of Eden”— has been discovered. Macallan’s employer, Terra Corp., wants to claim the planet before its biggest competitor, the Allied Republics of Mars, reaches it.

When both sides arrive at the planet (called Silvanus), neither wants to let the other land its shuttle, as this could constitute a legal claim, like planting a flag on the Moon. Terra attempts to covertly send Macallan onto the surface —but when the craft is shot down, an all-out war is almost triggered. Macallan finds himself on a strange world and inexplicably connected to an ancient consciousness that could be the planet itself.

Science fiction readers will savor this read. The scientific speculation is solid, the pacing relentless, and the earth-centered philosophy powerful. The author’s social commentary is potent, similar to post-apocalyptic classics like Nevil Shute’s On the Beach (1957) and Walter M. Miller, Jr.’s A Canticle for Leibowitz (1959). Hitting close to home, Jeffrey writes: “To make matters worse, the virulent populist uprisings of the early twenty-first century had installed a series of kakistocracies among the most powerful nations whose leaders flatly denied the facts of global warming with religious fervor and demonized all science…”

This is the first installment in Jeffrey’s Space Unbound saga, and the author leaves numerous tantalizing plot threads dangling at novel’s end. Readers are sure to enjoy this well-written, multi-layered, impactful science fiction adventure.