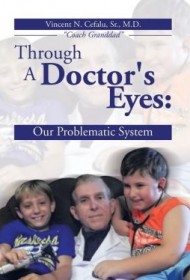 A retired family practice physician with patients in rural Louisiana reflects on treatment challenges as well as rampant ineffectiveness and waste in the medical world in his memoir, Through a Doctor’s Eyes: Our Problematic System.

Over the years, Dr. Vincent N. Cefalu treated patients of all kinds, ranging from battered children and the obese to prison inmates and those with mental and substance abuse issues and more. He also worked briefly as a coroner. Time and again, he writes, he struggled with issues of government waste and injustice, controlling drug companies and other situations that greatly impacted the wellbeing of patients and his own practice.

The author is honest in sharing personal issues, such as his making a huge mistake in determining the cause of one man’s death, resulting in damaging publicity. Despite his difficulties, he also emphasizes the great importance of doctors working in rural areas where resources are limited.

Cefalu’s ideas, however, are posited in opinionated, stream-of-consciousness writing that leads him to run from one subject to the next with no chapter or section breaks or even transitions, save for words such as “Getting onto another topic, . . .”. He jumps back and forth in time and between wildly diverse topics, such as from determining the medical cause of weakness in the elderly to the rise in numbers of autistic babies. There are also occasional spelling slips (such as, “descent” for “decent” and “conceded” for “conceited”).

On the positive side, the author offers numerous specific examples from his own practice to illustrate his deep concerns regarding the troubling way government bureaus and pharmaceutical companies negatively impact the wellbeing of people, especially the impoverished, and why the system needs revamping.

Overall, while the book contains thought-provoking information, as written, its disconcerting disorganization creates a challenging read that is likely to garner a limited audience.