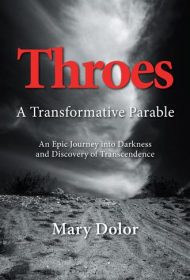 Mary Dolor’s Throes is part fictionalized memoir, part self-help book that recounts the tortured path of a mother and her substance-abusing daughter.

Dolor’s “parable” uses a mother and daughter as archetypes symbolizing those possessed by “the beast” of addiction. The story is narrated by Susan, adopted mother of Mariah.

As a child, Mariah exhibited sudden mood changes and defiant behavior, perplexing her parents. Eventually, she became addicted to cocaine and methamphetamine—and skilled at feigning good behavior while plotting to obtain drug money or privileges.

At age 18, Mariah left home, beginning a cycle of abusive relationships and stints in jail and rehabilitation. Mariah had six babies in less than five years, four of whom she gave up for adoption, each time earning a substantial amount of money, which she subsequently used for drugs. On one occasion, after having relinquished a child for adoption, she duped her parents into giving her money by claiming a friend’s baby was hers. Dolor recalls her devastation at the discovery: “She has mutated into a despicable beast I do not recognize.”

The author completes each chapter with self-reflective questions meant for readers trying to save the addict. For example, she asks: “When is acceptance of a situation not a defeat?” and “What would it take for you to finally say, ‘Enough’?”

Although the story is fictionalized, Dolor tells a believable tale. The narrative is gripping and raw, effectively expressing the narrator’s anguish and personal conflict.

Part III is devoted to self-help ideas. It’s largely a description of the now-familiar principles of neuroplasticity (controlling your thoughts to alter the material form of your brain) and codependency. Readers won’t find much here in the way of fresh ideas, and while Dolor presents various scientific findings, many lack attribution, eroding the information’s value.

Nevertheless, for readers interested in addiction or living with an addict, these pages provide an unadorned, engrossing account of the pain addiction can inflict, as well as suggestions for taming “the beast.”