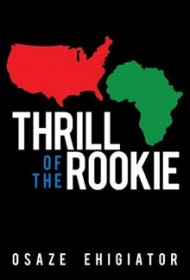 Osaze Ehigiator came to the U.S. from Nigeria in 1985 to attend college. With less than $400 to his name when he arrived, he went to work first in a fast-food restaurant and then driving a taxi at night while attending classes during the day. Initially Thrill of the Rookie appears to be the story of his adjustment to life in the U.S., but it eventually turns into a documentary about life on the streets when you’re down and out.

As an overnight cab driver in one of Dallas’ rougher neighborhoods known for drug dealing, gangs and prostitution, Ehigiator saw it all. He ferried prostitutes around town as they went about their business, stood witness to small-time pimps trading hookers like they were baseball cards, saw street violence firsthand and even dodged a few bullets himself while fleeing would-be robbers.

He was astonished by what he saw and recalls telling one 16-year-old prostitute passenger, “I am still trying to make sense of certain things I’ve witnessed on the street. If I had not come to the United States and experienced them on my own, I would never have believed these things could happen in a million years. They surpass my imagination. These types of things I would not have expected to see in God’s own great country. She sends young men and women into harm’s way to protect the freedom of others around the world and yet cannot protect young kids on her own soil. It is a total tragedy.”

Despite the fact that English is not his first language, Ehigiator’s education here has paid off with a highly readable book. However, it could also use some heavy editing to clean up rough patches, keep the story on task and clearly identify what the focus is going to be from the get-go. Others have written more accomplished down-and-out-in-America tales, but Ehigiator’s talent for storytelling is evident. With some additional polishing, his story eventually may shine.