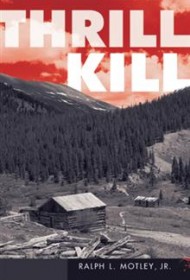 When Townes’ crackhead sidekick commits suicide, he’s assigned a seductive new partner, Sgt. Kim Patterson, a lithe vixen whose libido is bigger than her gun. Their first case together is a hooker’s gruesome murder, followed quickly by a second hooker’s attempted murder and the slaying of a local millionaire’s stepdaughter. But, hey, all work and no sex play makes the sarge a dull girl, so she indulges herself freely during frequent breaks in the action. It’s a nasty habit that will come back to haunt her.

This 2009 thriller is Ralph L. Motley, Jr.’s third crime novel. But rather than a solid addition to the genre, Thrill Kill too often feels like a pastiche of crime-show archetypes: the veteran detective who hates desk work; a junior partner with issues; a shady but lovable informant, and a sultry golddigger, among many.

For great stretches, Thrill Kill drifts from scene to scene without much purpose. Different characters’ points of view are often tangled up. Dialogue is clunky. And an underdeveloped bad guy never really gets the pulse pounding.

That’s too bad because protagonist Townes—a mountainous former football player with a dysfunctional past—has real potential to be as engaging and complex as James Patterson’s Alex Cross, but never fully blossoms. And while some brilliant sleuthing might provide an intricate counterpoint to Sgt. Patterson’s horniness, it just doesn’t happen.

Regrettably, the most vivid action comes in that handful of sex scenes, overshadowing a plot that’s already hard to follow. Most of the non-carnal action happens in the last few pages, and feels forced. So while the foreplay is credible, the climax ultimately isn’t.